Sisonke, meaning “Togetherness” is a movement formed by sex workers for sex workers. The organisation started after sex workers grew tired of being abused, isolated and suffering human rights violations. It was officially launched in the Western Cape, 2003 and has since established offices in six provinces: Western Cape, Eastern Cape, KwaZulu-Natal, Gauteng, Limpopo and North West.

Sisonke has membership all over South Africa and endeavors to set up offices in all nine provinces in the near future. Currently having a head office in Observatory, Cape Town, Sisonke has a staff complement of more than 30 employees nationally and continues to grow. 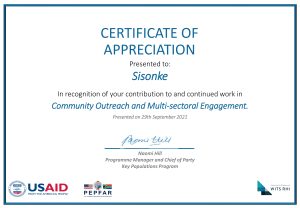 Join the Sisonke Board.

In Loving Memory of Shane

Congratulations to class of 2021. What next?

On this day, we are sharing a brand-new HandsOff! factsheet with data on #humanrights violations against #sexworkers in Southern Africa. It’s time for change!

As #ICASA2021 ends, so we & 100+ other orgs from the continent representing key populations in Africa have signed the Durban Declaration!

To read more about this call to action, see this article on our website: https://bit.ly/DurDec

If you have not registered you still have time #ICASA2021 Follow the link to register https://zoom.us/webinar/register/WN_gF8KYa-9QK2hlZjzYpgOnw