Sisonke, meaning “Togetherness” is a movement formed by sex workers for sex workers. The organisation started after sex workers grew tired of being abused, isolated and suffering human rights violations. It was officially launched in the Western Cape, 2003 and has since established offices in six provinces: Western Cape, Eastern Cape, KwaZulu-Natal, Gauteng, Limpopo and North West.

Sisonke has membership all over South Africa and endeavours to set up offices in all nine provinces in the near future. Currently having a head office in Observatory, Cape Town, Sisonke has a staff complement of more than 30 employees nationally and continues to grow.

Staff of the Month

Sisonke is proud to announce Katlego Rasebitse as our Staff of the Month for July and August respectively.
Decriminalise Sex Work Now Asijiki! 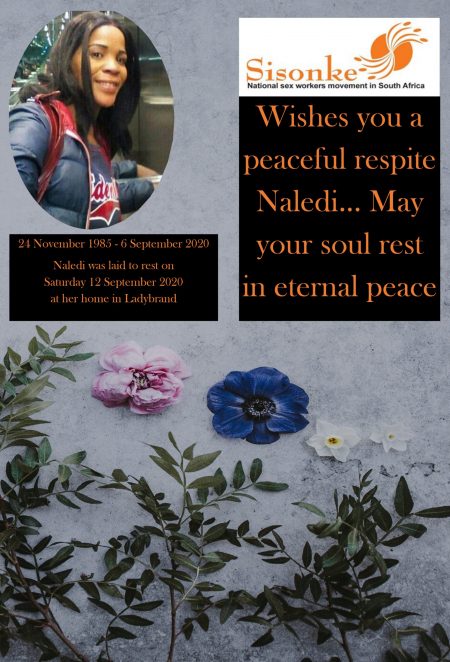 How much has #COVID19 impacted the rights of women and girls? Read this article by @equalitynow to find out the extent of the impact of COVID 19 restrictive measures on child marriage across the globe. http://ow.ly/cdn950BPncK https://twitter.com/equalitynow/status/1315257099597815811

“Zambia has witnessed an increase in the number of #childmarriage cases & teenage pregnancies during this period. We must take stock of this as a nation & offer solutions aimed at addressing these violations”- WLSA’s Besa Mwansa. #DayOfTheGirl
Read more ➡️ http://ow.ly/cdn950BPncK

[Podcast] 📢Sex work has been an occupation 2400BCE yet still frowned upon.Senior Researcher of @hrw joined me for an in depth conversation and LadyX (@SweatTweets) shares her 21 years story as a sex worker.@Sisonke_ZA #SRHR
https://anchor.fm/hlalefang-makoetlane/episodes/Sex-Work-with-Skye-Wheeler-Human-Rights-Watch--USA-ekqdvf

This error message is only visible to WordPress admins


Error: API requests are being delayed for this account. New posts will not be retrieved.